Ophiuchi has no connections with the constellation Ophiuchus, it was a medium box with a YAML parser. It shared similarities with the machine Time in terms of the exploitation to provide the initial shell and raced to root via web assembly. The root section was an irksome task dealing with the compiling.

The first enumeration is always a Nmap, and it identified two accessible ports.

Apache Tomcat running in port 8080 responded with a YAML parser. YAML is a human-readable data-serialization language, that is used for configuration files and in applications. It is a strict superset of JSON. The landing page resembled the box Time that had a JSON parser. With the experience in exploiting time parser, I provided a test JSON, and it returned the following message.

A single quote was used to assess the input parsing. It encountered a 500 internal server error as depicted in the below screenshot. 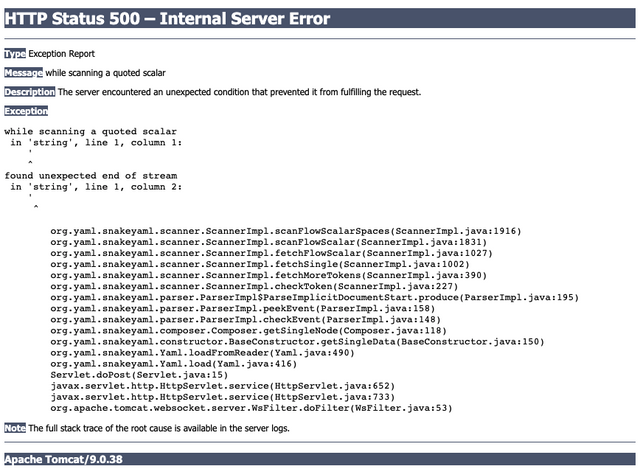 Serialization is when an object in a programming language (say, a Java or PHP object) is converted into a format that can be stored or transferred. Whereas deserialization refers to the opposite: it’s when the serialized object is read from a file or the network and converted back into an object.Insecure deserialization vulnerabilities happen when applications deserialize objects without proper sanitization. An attacker can then manipulate serialized objects to change the program’s flow.

I followed Snakeyaml Deserialization article that had a detailed explanation about vulnerability and exploitation. I confirmed the vulnerability using the below script.

After making the required modification it was compiled. The compilation was successful and build yaml-payload.jar file. The next part was to run a server to fetch jar file.

A python server was started with python3 -m http.server. But delivering the payload resulted in errors. This phase twisted a bit and reading all the lines in the error, I found the problem. It was not compiled with the appropriate jre version. One thing to suggest after having annoying errors “Read every line when you have an error”.

I fixed it by using the appropriate version of jre and it delivered the shell as user tomcat. tomcat user had no privilege to read the user.txt. There was another user in the box, it was admin.

The box had Apache Tomcat running in port 8080, it is a free and open-source implementation of the Java Servlet, JavaServer Pages, Java Expression Language, and WebSocket technologies. Apache Tomcat has an admin console, and usually it is installed in /opt. The config file was located at /opt/tomcat/conf/tomcat-users.xml.

The password for user admin was whythereisalimit. The box was half done, the credentials were used to establish an SSH connection as user admin. admin user had sudo privileges, to run a go file without a password.

The index.go file was performing a deployment using a bash script named deploy.sh. A webassembly file named main.wasm was included in the go script.WebAssembly is an open standard that defines a portable binary-code format for executable programs. Here, it was identified that the functions and variables are imported from the main.wasm file. If variable f equals 1, it will execute /bin/sh deploy.sh.

The absolute path was not used in the go script, when the go script is executed, it will read the files from the current working directory. The user admin had no privilege to edit the files in /opt/wasm-functions. So I copied the folder to /tmp and tried executing the go script. It responded with a message Not ready to deploy. The value of variable f was not 1 that is read from the wasm file. The wasm cannot be directly edited since it was a binary. The text readable format of the WASM binary is WAT(Web Assembly Text). The value of f can be edited in this format. The webassembly file was copied to the attacking machine using Netcat.

To edit the file a tool suit named wabt available at Github was used. First the file was converted to readable format.

The value of f was a constant 0, i32.const 0 was changed to i32.const 1 and compiled back using wat2wasm binary and send to vulnerable machine using SCP.

The next part was to add the SSH keys to deploy.sh . After adding the SSH keys in deploy.sh, the go script was executed with sudo privilege. Now with the attacking machine’s key added for root, an SSH connection was made and Ophichi was rooted.

If you are having trouble copying the SSH keys, use Ed25519, it has lots of benefits over RSA. The main advantage while doing hackthebox is that it only contains 68 characters. If you are not familiar with Ed25519 read Comparison of SSH algorithms. The keys can be created using ssh-keygen -t ed25519.